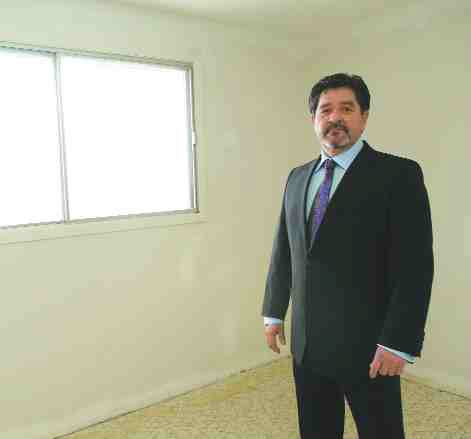 Robert Byers, CEO of Namerind Housing Corporation, inside one of the corporations affordable housing units that is under renovation at MacKenzie Mews.

Had it not been for affordable housing options in Regina, Michelle Phillips is not sure where she and her two teenaged daughters would have wound up living.

“Housing costs are so high right now you can’t find anything affordable that’s worth living in,” said Phillips. “It’s either run down or there’s health concerns or the areas aren’t very good.”

But fortunately for her, she was able to find a spot in one of 19 newly renovated townhouse units in the Glencairn neighbourhood owned by Namerind Housing Corporation.

The units were officially opened Thursday by officials from Namerind (a non-profit dedicated to provided low-income housing for Regina’s Aboriginal community) and the Saskatchewan Housing Corp., which helped fund the $1.6-million project.

“Every year, it seems like they’re needing more and more, but there’s less and less,” said Phillips. “The poverty is just more widespread. There’s wait lists all over. I just got lucky applying when I did.”

Robert Byers, Namerind’s CEO, said the organization operates 280 homes (which come at a maximum cost of $700 per month for the tenants) but still has 650 families on its waiting list.

“It maybe hasn’t skyrocketed, but (demand) definitely has increased and it’s pretty steady. For the past few years, we’ve been keeping stats as to how many inquiries we have at our office and it has doubled in the last four years.”

The provincial government has committed another $101 million, which will go toward 900 more affordable rental units in Saskatchewan.

Recently, Namerind has even branched out into other businesses — it now owns a strip mall, a warehouse and an apartment building it rents out at market prices — to subsidize its low-income commitments. When the corporation’s agreements run out with various housing complexes, Namerind uses the fund from its other businesses to subsidize the rent cost over the $700 paid by a tenant.

“We have to come up with ways to come up with new revenue streams to replace the subsidy from the operating agreements,” said Byers. “We’re always looking for other opportunities.”